Doctor Who - Shroud of Sorrow by Tommy Donbavand.

Doctor Who - Shroud of Sorrow by Tommy Donbavand.
Reviewed by Tilly 12yrs old.

Doctor Who - Shroud of Sorrow. This book is a very good read, especially if you watch BBC's television show 'Doctor Who'. But there's something for fans of the old series too, it includes flash backs from the classic series. The central characters in this story are the Eleventh Doctor and his companion, Clara Oswald.

The novel is about grief and how we deal with it. In the story the Doctor and Clara come from another   planet to Earth. They can travel through time and space by T.A.R.D.I.S (time and relative dimensions in space, if you don't watch the show). When they get to Earth they find that a race called the Shroud are taking over the world using grief as a weapon. The Shroud can transform their face to take on the  appearance of a dead, loved one. For example, one of the victims of the Shroud was called Mae and she saw her dead grandmother. The Shroud (disguised as Mae's grandmother) accused Mae for killing her grandmother.

The Shroud can become things, for example a stain or a burn could be in the shape of the Shrouds form. The Shroud then transformed themselves into people but now they only looked like the disguise to the victim, the Shroud would now (because they were in human form) hold hands with their victim. All the victims would go through the 5 stages of grief: denial, anger, bargaining, depression and finally acceptance but once they get to acceptance they would never go back to their normal selves.

The Doctor, Clara and a couple of others who are not victims of the Shroud have to go through a wormhole to the planet the Shroud last attacked in order to find the key to saving Earth.

The thing I like most about the book is the characters Clara and the Doctor because the author got the them exactly as they are in the television show. When the Doctor uses his hands for form puppets of them Clara asks which one is him, he holds up a hand and she says, "The chin's too small." I loved these witty interactions they shared.

I also liked how this book used actual events from the Doctor's previous regenerations, for example, people the Doctor used to know.

I rate this book out of five Daleks:

I rate the book 4.5/5 because sometimes I would get confused about what was happening, but overall, I really enjoyed the read.

Posted by Anonymous at 10:24 PM No comments:

Hello everybody I just wanted to show you a story I wrote for my mum's new writing club for kids (if you live in Brisbane and you are interested, then it's on every 2nd Tuesday for (10-13) and every 2nd Thursday of the month for (13-17) you can book by calling Black Cat Books and Cafe). It's really fun! Here is the URL for Black Cat Books and Cafe: http://www.blackcatbooks.com.au.

With this story, we had to include words as they were called out, to make it a little tricky. I've made the key words bold for you to see.

So here is my story:

Sunshine was scared of the ghost behind the straw in the garage. He was a yellowish coloured ghost and had no shoes on. He had a beard and bright red eyes but he made her giggle whenever she walked past him.
"Stop it and just go away" Sunshine screamed at the ghost. His tummy rumbled. Then it was dark and Sunshine was at a small creek. She heard the noise of the ghost, but this time Sunshine was the one with no shadow or heart, she could not run away anymore. It was Sunshine who was now the ghost behind the straw.

Thanks for letting me share my story! I know I haven't reviewed for a little while, but I'll be back soon with a new review.

Posted by Anonymous at 8:41 PM No comments:

Of Mice and Men 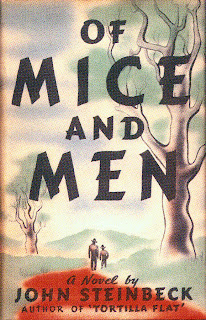 Of Mice and Men by John Steinbeck
Reviewed by Milly (14)

Of Mice and Men by John Steinbeck is a  tragic book about the life of a pair of migrant workers and their dreams.

You see the pair of men first on their way to work. The bus driver dropped them off 14 miles from the barn so they spent the rest of the day walking when they finally rest at the side of a water bed. In the book the place they stopped is described in the book with very descriptive and almost poetically by Steinbeck. Here is an example of his style of writing: 'On one side of the river the golden foothill slops curve up to the strong and rocky Gabilan mountains, but on the valley side the water is lined with trees-willows fresh and green with every spring, carrying in their lower leaf junctures the debris of the winter's flooding; and sycamores with mottled, white, recumbent limbs and branches that arch over the pool.'

After the text above it introduces Lennie and George as opposites but, they still manage to have a bond as tight as brothers. George, a realist, is smaller and weaker than Lennie, but he is the smarter one. Lennie, on the other hand, is a huge guy with a brain as big as a peanut and the strength of a lion. Lennie is a dreamer.

Lennie forgot everything he was ever told but always remembered the story about the rabbits. The story is dream that the pair shared to rise there hopes. It starts off by George saying that men like themselves are lonely as hell cause they got no one and have no home to go to. But not them cause, as Lennie said excitedly, "I've got you and you got me an were gonna get a house together with chickens and a cow and rabbits and I can tend to them and grow alfalfa for them!".

The book Of Mice and Men has the theme of belonging and people's rights. It shows this mainly through the characters Cooks, a dark-skinned man, and  Curly's Wife, who likes talking to the other workers.The time this book was based there were little to no rights for women and black people. For example, Cooks was to sleep in the stables cause he was black and he was so lonely because no one would talk to him. Curly's wife is also lonely because she is not allowed to talk to anyone other than her husband (who is not a nice guy). That is all because of how they look and their gender. They also show how unwelcome Curly's wife is--through the whole book no one mentions  her name because it didn't matter, all they needed to know was she's Curly's wife.

This book made me cry and cry (I still cry if anyone mentions the end) but it was worth it. Steinbeck is an amazing writer and  makes you create a bond with each character. When Mum told me I should read it I said ok, but I was not expecting this piece of art. If you haven't read this book yet then you NEED to read it.

I rate this book out of 5 paper dolls:

I LOVE THIS BOOK! but I don't think I could read it again, too sad.
Posted by Milly at 10:08 AM No comments:

Phyllis Wong and the forgotten secrets of Mr Okyto

This book is AMAZING! I am usually very fussy about what I like to read because I get bored easily, but the whole way through this book was brilliant and I can't wait for the second book to come out.

The Characters in this book are...
* Phyllis Wong  {the main character, Phyllis loves magic she is very good at being a magician because her grandfather was one too}
* Clement {Phyllis's best  friend, Clement loves gadgets and his family own an appliance store}
*Daisy {Phyllis's dog and she would do anything for Phyllis]
*Chief Inspector  Barry Inglis {he is an officer and also one of Phyllis's friends}
*Harvey {Phyllis's dad}
*Minette {one of Phyllis's friends and Minette is a belly dancer}
*Mrs Lowerblast {owns the shop of the first stolen item and is one of Phyllis's friends}
All the characters are great in my opinon. Phyllis is the best character, but I love all of the characters because each character is unique. They all have their own traits and are quite funny. Phyllis is a very likable character, she has lots of friends!
This story is set in a big city. Phyllis lives in a huge apartment with it's own personal theatre, where she performs her magic tricks.

Phyllis is a good magician, but is there someone better? Someone using their skills to steal? A theif acomplishing the impossible, like making the famous Van Rockechild necklace just disapear or switching somthing right in front of sombody's eyes without them noticing. Phyllis decides to solve the mystery because the first crime happens in Mrs Lowerblast's antique store and she is another friend of Phyllis. The genre of this book is mystery--a crime, but also the mystery of magic.

Phyllis Wong and the forgotten secrets of Mr Okyto is a great read and personally it is my favorite book.


The paper doll I chose today is x-mas themed a Santa paper doll:

Posted by Anonymous at 8:42 PM No comments: 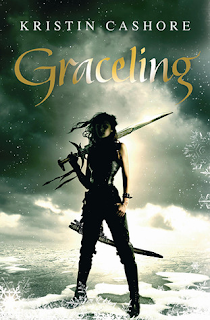 Graceling by Kristin Cashore is an exciting and enticing fantasy that starts with a girl in a fantasy realm called The Seven Kingdoms. Katsa is almost like every other girl, except for the fact that she has a talent for killing things. This is an interesting trait, but she is left with the notion that it's every person for themselves. She is a Gracling. Graclings are just people who have a special gift, some more useful then others. You can tell a graced person by their eyes, they are different colours. One day Katsa meets a boy with the most spectacular eyes, one silver and one gold. The day she meets Po? That's the day her life changes.

Katsa has always been an obedient assassin and thug for her greedy uncle, the Kind of her realm, but Po makes Katsa start to question her role. When Katsa disobeys the King for the first time, she now finds herself an outlaw on the run. She may as well follow Po on his mission to stop an evil Gracling.

I liked Katsa, she is brave, strong and willing to do anything to protect her friends. She is really inspiring. All the characters in this novel were well developed, like Bitterblue, even though she's a little kid and traumatised, she has moments of strength. Po seems to be a lighthearted character, but he will be tested.

This thrilling action is so fast paced, you won't want to put the book down (I know I didn't). The thing that stood out about it compared to other fantasy stories is it's written from the point of view of not only a girl, but a girl who is a warrior at heart. I love this amazing book and I give it out of 5 paper dolls:

I will definitely be reading Fire and Bitterblue in this series!
Posted by Milly at 9:48 PM No comments:

Book reviews for kids, by kids.
Sisters, 10 and 14yrs old.
We review tween and teen fiction.
If you've read the books we review let us know your opinion! 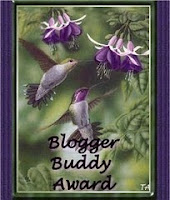